PETROLEUM, FROM THE LATIN “PETRA” and “OLEUM” (MEANING “OIL FROM ROCK”) IS A NATURAL MINERAL OIL USED AS AN ENERGY SOURCE.

FROM ORGANIC MATTER TO OIL

HOW OIL IS FORMED

Oil is a fossil fuel. It forms through the slow transformation, over tens of millions of years, of once-living micro-organisms (plant and animal) that were deposited on the sea bed and eventually subjected to high pressures and temperatures. Oil or gas reservoirs formed in this way are found just about everywhere on the planet, under both land and sea. Oil formation is a slow process comprising several stages. When petroleum engineers study an area, they check to be sure that these different stages actually happened. This enables them to determine whether a reservoir may be viable to operate, and whether it will yield oil or gas of optimal quality.

Within source rocks, hydrocarbons – i.e. petroleum (also called “oil”) and natural gas – form, the result of a transformation of sediments rich in organic matter as they are gradually buried in the ground. Under the effects of high pressure and temperature, the organic matter decays, forming oil first, and then gas in certain situations; the remaining sediments solidify. Parts of the hydrocarbons thus formed are gradually expelled from the source rock, and migrate toward the surface.

MIGRATION OF HYDROCARBONS TO THE EARTH’S SURFACE

During their ascent toward the land surface, oil and gas sometimes seep into reservoir rocks, where they can accumulate. A reservoir forms when the hydrocarbons reach impermeable rock. Their progress halted, they build up in the porous reservoir rocks, forming what are known as “conventional” reservoirs. Hydrocarbons that remain trapped in the source rock, which is highly compacted and hardly permeable at all, are called “source-rock hydrocarbons”, or more commonly “shale hydrocarbons”. These are “unconventional” oil and gas resources.

In order for a hydrocarbon reservoir to be exploitable, it must hold significant quantities of oil or gas trapped in its reservoir rock. This configuration, notably, protects the hydrocarbons from external factors (e.g. air, bacteria) that could alter them.

The units of measurement for oil quantities are barrels (roughly 159 liters) and tons.

Estimates of proved reserves are calculated based on the recoverable quantity of hydrocarbons, with reasonable certainty, based on the economic conditions and the technologies of the time. These reserves fluctuate from year to year, and are still growing thanks to the discovery of new fields, and to the development of new recovery technologies that improve well yield.

The prices per barrel of oil are set on the international markets. As an example, Brent (the name of a reservoir in the North Sea) is the benchmark for crude oil, especially on the markets in parts of Europe, Africa and the Middle East. 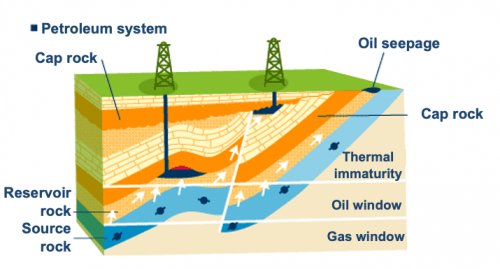